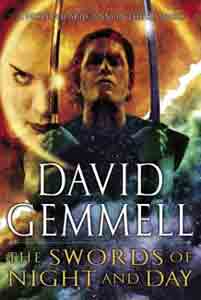 The Swords of Night and Day

Synopsis of The Swords of Night and Day

Even in death, Skilgannon the Damned's name lives on. Now, as an ancient evil threatens the Drenai heartlands, he returns.

A thousand years after they fell in battle, two heroes -- Druss and Skilgannon -- are revered throughout the war-torn lands of the Drenai where men and women live in abject fear of the Joinings, abominable meldings of man and beast, and of their mistress the dark sorceress known as the Eternal. None can stave off these ruthless foes. But what if the soul of a hero could be called back from the void, his bones housed again in flesh? An ancient prophecy foretold that Skilgannon would return in his people's darkest hour. To most, this is a foolish hope, but not so to Landis Kan. For years Kan searched for the tomb of Skilgannon the Damned. And at last, he found it, gathered up the bones and performed the mystic ritual.

But the reborn hero is an enigma; a young man whose warrior skills are blunted and whose memories are fragmented. This Skilgannon is a man out of time, marooned in a world as strange to him as a dream, remote from all he knew and loved. Or nearly all. Before bringing Skilgannon back, Landis Kan had experimented with other bones in the hero's tomb. That ritual resulted in a surly giant who possessed astounding strength, but no memories. To Kan, he is a dangerous failure. To Skilgannon, this giant represents their last hope.

As the ageless evil of the Eternal threatens to drown the Drenai lands in blood, two legendary heroes rise again.

Reviews of The Swords of Night and Day

The best thing an Author can do is leave you wanting more. In the end, I want more. -- Bill Lawhorn, SFRevu

Though trying to make this Book fit into the full saga will need an access database, fans of the Series and newcomers will enjoy this fabulous fantasy. -- Harriet Klausner, AllScifi.com

To sum the whole thing up this novel is classic Gemmell and should be treated like a fine wine. -- Gareth, David Gemmell Fansite

A great start is followed by a great middle and topped by a great ending - there is little inane dithering nor page filling and the plot may actually be followed and believed (fantastically speaking of course!). -- Antony Wagman, SFRevu