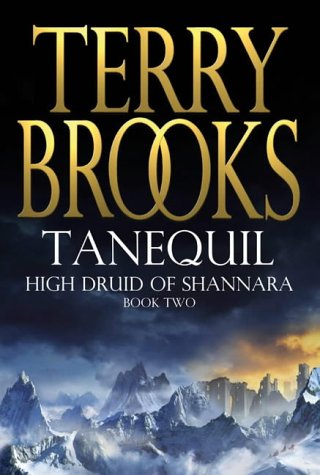 Events that began in Jarka Ruus, Book One of High Druid of Shannara, come swiftly to a head in this second thrilling volume. Alliances are made, trusts are betrayed, and prices are paid. Through it all, Terry Brooks orchestrates the action with the flawless hand of a master mythmaker... fashioning another exquisite link in his chain of bestselling epics.

Loyal to none but herself and lethal even to those closest to her, Shadea a...Ru now holds sway as High Druid of Paranor...her ascension to power all but unchallenged in the wake of Grianne Ohmsford's sudden, mysterious vanishing. Only Shadea and her catspaw'the treacherous Prime Minister Sen Dunsidan...know the secret fate of the true Ard Rhys . . . for it was they who engineered it, by means of dark magic. And now Grianne languishes in the fearsome and inescapable netherworld called the Forbidding.

Their bloodless coup a success, the corrupt pair, and their confederates within the Druid Council, seeks to make their dominion over the Four Lands absolute...with the aid of a devastating new weapon. But it could all be undone if Grianne's young nephew, Penderrin, succeeds in his frantic quest to rescue her. Shadea's airship-borne minions and the relentless assassin under her command continue their fierce pursuit of Pen and his comrades.

Eluding death is only half the battle for Pen. To breach the Forbidding and bring Grianne back to the natural world means finding the fabled Tanequil . . . and the talisman it alone can provide. That means journeying into the Inkrim...a dreaded region thick with shadows and haunted by harrowing legends. It also means striking a bargain more dire than Pen could ever imagine. But there can be no turning back. For in her unearthly prison, the Ard Rhys faces a demonic plight too hideous to countenance. . . .

It just sort of sits there, taking up room until the next Book. -- Dave Roy, Curled Up With a Good Book

Terry Brooks has once again created a fantastic fantasy set in the world of Shannara as well as in its evil twin the Forbidding. -- Harriet Klausner, BooksNBytes

Terry Brooks is a world builder, an eloquent fantasist whose writing stakes a claim in the reader's mind and heart. -- J. A. Kaszuba Locke, BookLoons

This is archetypal high fantasy from a master of the form. -- Steve Mazey, The Eternal Night