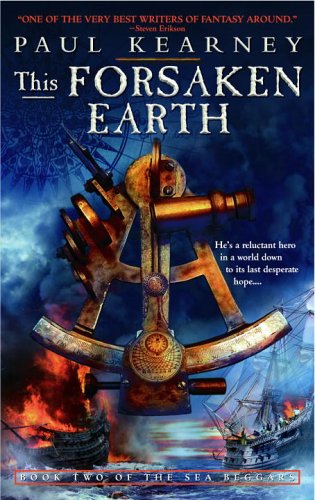 Synopsis of This Forsaken Earth

He's spoken of only in whispers. His origins are a mystery. Some say that he's descended from the last of the angels. Others say much worse. By all appearances, Rol Cortishane is just another ruthless pirate roaming the lawless seas, raiding warships and slavers. But the truth is something far more complicated and dangerous than anyone can imagine, including Rol. Even as he seeks to escape his birthright, Rol is slowly discovering who...and what...he really is. But the revelation won't come without exacting a terrible price from Rol and all he loves. Now a treacherous figure from his past has made him a proposition it would be fatal to turn down. Racing against time, Rol must chart a harrowing course across the sea, back to the beautiful Rowen and the people she would rule as Queen. With his steadfast crew'the battle-scarred Creed, the mirthful halftroll Gallico, and a young escaped slave named Giffon...Rol will plunge headlong into a destiny as dark as they come. And toward a terrifying battle against an enemy as determined to destroy the world as Rol is to save it.

Reviews of This Forsaken Earth

There is plenty to enjoy but it does not fulfil the promise The Mark of Ran created. -- Owen Jones, SFFWorld.com

Readers will appreciate this sword and sorcery thriller and look forward to more tales of yore from Mr. Kearney. -- Harriet Klausner's Review Archive

Parts of This Forsaken World have a bleak beauty that reminded me of Cormac McCarthy's recent post-apocalyptic novel, The Road, while other passages are as lively and well observed as anything in the oeuvre of Patrick O'Brian. -- Paul Witcover, Scifi.com