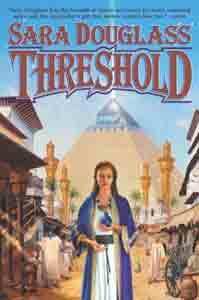 Over the hot southern land of Ashdod looms the shadow of Threshold, a massive pyramid which the Magi of Ashdod are building to propel themselves into Infinity, a plane of existence that holds the promise of technological magics and supposedly unimaginable power. For decades, thousands of slaves have lost their lives in the construction of this edifice. Now that this construction is almost complete, the Magi need only to add the finishing touches, and they will let nothing stand in the way of achieving their desire.

The Master of the Magi, a young and ambitious man, ready to do anything for power, sees the glassworker slave Tirzah as a plaything, a trifle to relieve the tensions of the day. He senses that under her placid fa...ade Tirzah is hiding something, but try as he may to see beneath her surface, she remains an enigma.

What he does not know is that her secret is the knowledge of forbidden magic. That she senses the inherent power in glass and can communicate with it-and that the glass in Threshold screams to her in pain.

For it knows what neither Tirzah nor any of the Magi suspect. That something waits in Infinity, watching, biding its time, and when the final glass plate is laid and the capstone cemented in blood, it plans to use Threshold to step from Infinity into Ashdod...

Threshold is a different type of story, one that will appeal highly to romance readers as well as fantasy fans. -- Cindy Lynn Speer, Fantastica Daily

Sara Douglass displays her usual remarkable imaginative ability in Threshold, which is a loosely Egyptian fantasy, heavy on the horror. -- Hilary Williamson, Bookloons