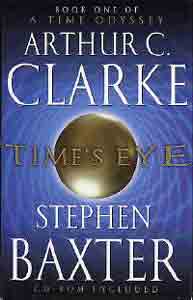 For eons, Earth has been under observation by the Firstborn, beings almost as old as the universe itself. The Firstborn are unknown to humankind... until they act. In an instant, Earth is carved up and reassembled like a huge jigsaw puzzle. Suddenly the planet and every living thing on it no longer exist in a single timeline. Instead, the world becomes a patchwork of eras, from prehistory to 2037, each with its own indigenous inhabitants.Scattered across the planet are floating silver orbs impervious to all weapons and impossible to communicate with. Are these technologically advanced devices responsible for creating and sustaining the rifts in time? Are they cameras through which inscrutable alien eyes are watching? Or are they something stranger and more terrifying still?The answer may lie in the ancient city of Babylon, where two groups of refugees from 2037'three cosmonauts returning to Earth from the International Space Station, and three United Nations peacekeepers on a mission in Afghanistan...have detected radio signals: the only such signals on the planet, apart from their own. The peacekeepers find allies in nineteenth-century British troops and in the armies of Alexander the Great. The astronauts, crash-landed in the steppes of Asia, join forces with the Mongol horde led by Genghis Khan. The two sides set out for Babylon, each determined to win the race for knowledge . . . and the power that lies within.Yet the real power is beyond human control, perhaps even human understanding. As two great armies face off before the gates of Babylon, it watches, waiting. . . .

Surprising twists and turns insure that the reader will fail to outguess the sly Authors. -- Paul Di Filippo, Scifi.com

Clarke fans expecting an exploration of the meaning of time to equal that of his previous musings on space and humanity will be disappointed, but this is still a rip-roaring adventure yarn that should appeal to fantasy, sci-fi and alternate history fans alike. -- Jen Talley Exum, Romantic Times Book Club

You won't set the Book down to eat or sleep or work if you can help it. -- Alan Cheuse, Chicago Tribune (Reprinted on Sunspot.net)

The Discontinuity has more in common with the premise of a ''Star Trek'' episode than with the philosophical speculations of vintage Clarke or first-rate Baxter. Nevertheless, the adventure is rousing, and I can't imagine anyone finishing this Book and not wondering what comes next. -- Gerald Jonas, The New York Times

Fans of either Author will find this to be a "must read". -- Ernest Lilley, SFRevu

Although Time's Eye doesn't have the force or ambiguity of 2001, it is a fast and engaging read, and, with the CD, it's a bargain, to boot. -- Mark Graham, The Rocky Mountain News