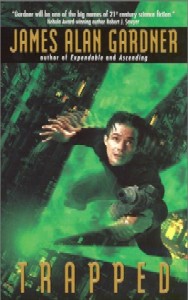 Life under the thumb of the Spark Lords -- the League's Earthly representatives -- is dull but comfortable for Philemon Abu Dhubhai and the other teachers at a third-rate private school for second-rate rich kids. But all that changes when a female student is found murdered by an unknown alien organism, and her boyfriend, the prime suspect, goes missing. Suddenly an unofficial homicide investigation has snared Philemon and five other "misfits" -- plus one of the planet's most powerful criminals, the mother of the murdered girl -- trapping them all in a web of terrifying conspiracy that could involve the Spark Lords ... and even the League of Peoples itself. For all is perilously not what it seems, on Earth and in the heavens. But then again, neither are Phil and his compatriots ...

...as with his previous writing, James Alan Gardner takes on favourite genre themes and gives them his own thought-provoking twist throughout the course of the novel. -- Juliet E McKenna, The Alien Online

Gardner is the kind of writer, like Roger Zelazny, whose prose is so effective in doing everything that good prose is supposed to do... -- Paul Witcover, Scifi.com