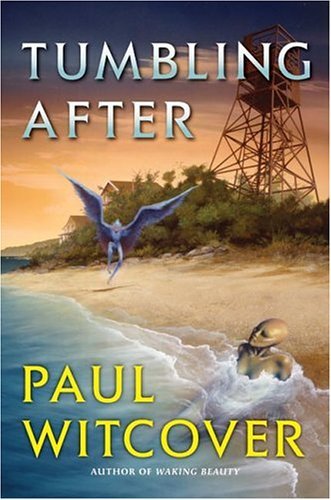 Synopsis of Tumbling After

Twelve-year-old twins Jack and Jilly Doone are closer than most siblings -- uncannily linked, sharing thoughts, sensations, and emotions as if one person -- as they enjoy a mostly parentless August at the Delaware shore. But in the fury of an onrushing hurricane, a frighteningly close brush with death awakens an awesome power in Jack that changes everything ...

On an alternate Earth -- transformed centuries earlier by the Viral Wars into a savage battleground where the "normal" followers of the emperor Pluribus Unum clash unceasingly with warriors of five mutated elemental races -- a young aerie named Kestrel sets out into the perilous Waste with four companions, trusting their fates to the great and powerful Odds. Taking the next all-important step in every "mute's" odyssey to adulthood and duty, Kestrel dreams of glory and sacrifice, and of single-handedly bringing about the total extermination of the hated "norm" enemy. But even his ability to soar high above his world will not help him escape the treachery of those he dares not trust, and his psionic powers over the winds cannot blow away the strange and shattering destiny that awaits him at journey's end.

A different yet oddly synchronistic fate looms for Jack Doone in this endgame summer of frightening discovery and forbidden experimentation. Suddenly cursed with the uncontrollable power to alter reality -- to "do over" events and change the flow of his life and the lives of those around him -- his day-to-day existence has become a twisted version of the "Mutes and Norms" role-playing game devised and orchestrated by his uncle Jimmy. And now the twins' survival may come down to a single roll of the cosmic dice, as Jack finds himself devastatingly alone for the first time, his cherished Jilly's protector in a terrifying battle to determine the real, armed with no weapon but memory.

A staggeringly original work that blurs the lines between reality and the fantastic, between the accepted and the taboo, between fantasy and science fiction, Paul Witcover's Tumbling After is proof positive that intelligence and invention still reign supreme in the thrilling literature of speculation.

Reviews of Tumbling After

A dark, often troubling account of metaphysical mysteries and multiple realities, it is as good as anything that has crossed my desk in months. -- Bill Sheehan, The Washington Post

I'm not sure what Witcover was attempting with this novel but the result ended up being less than the sum of its parts -- Steve Sawicki, SFRevu

This is an unusual and challenging novel that will repay thoughtful readers looking for something beyond the usual trite and overworked trappings of much fantasy. -- Pamela Sargent, Scifi.com