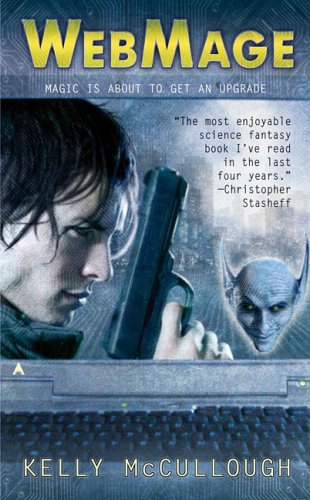 Magic is about to get an upgrade

Ravirn is not your average computer geek. A child of the Fates...literally...he's a hacker extraordinaire who can zero in on the fatal flaw in any program. Now that twenty-first-century magic has gone digital that makes him a very talented sorcerer. But a world of problems is about to be downloaded on Ravirn...who's just trying to pass his college midterms.

Great Aunt Atropos, one of the three Fates, decides that humans having free will is really overrated and plans to rid herself of the annoyance...by coding a spell into the Fate Core, the server that rules destiny. As a hacker, Ravirn is a big believer in free will, and when he not only refuses to debug her spell but actively opposes her, all hell breaks loose.

Even with the help of his familiar Melchior, a sexy sorceress (who's also a mean programmer), and the webgoblin underground, it's going to be a close call...

The combination of computer technology with magic spells makes for a whimsical tale of action, adventure, and romance. -- Harriet Klausner's Review Archive

Over all WebMage is a very enjoyable read. -- Paul Haggerty, SFRevu

Though a preponderance of techie-talk may put off some readers, this is the kind of title that could inspire an army of rabid fans; it's a good thing a sequel is planned for 2007.( -- Publishers Weekly

This a wild, fun ride. It is perfect reading for any time. -- Chris McCallister, Epinions