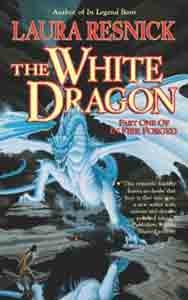 The White Dragon: In Fire Forged, Part One

Synopsis of The White Dragon: In Fire Forged, Part One

It is a time of vast changes in the island nation of Sileria. Oppressed for centuries by one conqueror after another, this land of fierce pride and ancient rivalries awaited the prophesied Firebringer, who would free them. Josarian, a mountain peasant, survived his leap into the volcano to become the Firebringer. He united the impoverished shallaheen, the magical fire-wielding Guardians, and the vastly powerful mages known as Waterlords in an unprecedented alliance that defeated the foreign Valdani who had ruled Sileria for too long. But now Josarian is dead, betrayed by the alliance and slain by the ice-dragon of Kiloran, the most powerful Waterlord in Sileria. Tansen, Josarian's second-in-command, has taken up the banner of independence, and leads the shallaheen and the Guardians against the Waterlords so that Sileria can be free of a tyranny far worse than Valdani rule. As the volcano goddess Dar rumbles her displeasure in earthquakes and lava flows, the forces of fate, prophecy, and magic combine to create new heroes--from the desolate mountains, from the water-starved cities, from the sea, and even from beneath the earth. Ancient forces join with unlikely allies to fulfill the prophecies that inspire revolt and excite religious fervor. But in Sileria, betrayal has long been a way of life, and it wears many faces as the ambitions of the high and the low ensnare the fates of people across the land, wreaking havoc among the faithful.

With consummate narrative skill, Laura Resnick brings to life the excitement and adventure of this magical land in its epic struggle to find its true leaders, heal ancient wounds, and chart a path out of chaos to a new day of peace.

Reviews of The White Dragon: In Fire Forged, Part One

Resnick's strong writing propells the story forward and makes the reader care about the outcome. -- BooksForABuck

While I was satisfied with the tale, I knew there was more to come. -- Asta Sinusas, SFRevu