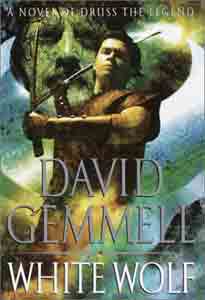 White Wolf: A Novel of Druss the Legend

Synopsis of White Wolf: A Novel of Druss the Legend

Skilgannon the Damned had vanished from the pages of history. No-one knew where he had gone, following the terrible triumph at Perapolis, and the assasins sent by the Witch Queen could find no trace of his passing. Three years later, a murderous mob gathers outside a monastery, faced by a single, unarmed priest. In a few terrifying seconds their world is changed for ever, and word spreads across the lands of the East -- Skilgannon is back.

Now he must travel across a perilous, demon-haunted realm seeking a mysterious temple and the ageless goddess who rules it. With assassins on his trail and an army of murderous foes ahead, the Damned sets off on a quest to bring the dead to life. But he does not travel alone. The man beside him is Druss the Legend.

Reviews of White Wolf: A Novel of Druss the Legend

If you're a Gemmell fan you'll love this latest novel as much as all the rest, although if you're a first-timer I'd recommend starting with Legend and then working yor way on from there. -- Ariel, The Alien Online

As ever with Gemmell, black is black, white is white and shades of grey are ruthlessly excised, but the story flows like a torrent; and if the devil has all the best tunes, then the Damned definitely gets the best weapons. -- Jon Courtenay Grimwood, The Guardian

It makes you want to go out and buy an overly ornamental pair of replica swords, strip down to your pants and run-off to fight some bad guys. -- Paul Skevington, SFCrowsnest