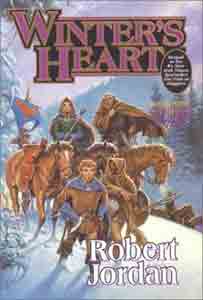 Rand, with Min, is on the run, and Cadsuane, in Carhien, is trying to figure out where he is headed. His destination is, in fact, one she never considered.

Mazrim Taim, leader of the Black Tower, is revealed to be a liar. But what is he up to?

Faile, with her companions Bain and Chiad (the Aiel Maidens), and Queen Alliandre and Morgase, is prisoner of Sevanna's sept.

Perrin is hunting desperately for Faile. With Elyas Machera, Berelain, the Prophet, and a very mixed "army" of disparate forces, he is moving through country rife with bandits and roving Seanchan . . . and in the wolfdream the man called Slayer seems to be hunting Perrin. In addition, the Forsaken are ever more present.

In Ebou Dar, the Seanchan princess known as Daughter of the Nine Moons arrives - and Mat, who has been recuperating in the Tarasin Palace, is introduced to her. Will the marriage that has been foretold come about?

There are neither beginnings nor endings to the turning of the wheel of time. But it is a beginning . . .

Jordan manages to leave us waiting eagerly for the next instalment. -- Wesley Williamson, BookLoons

It may be standard, but it is pretty well done for the first 6 or so Books. -- Caleyna, Fantasy Freaks Forum

As of late, the Series seems to have really slowed down, seemingly bogged down by the weight of the plot. Unfortunately, Winter's Heart seems to slow it down yet another notch. -- Harry Raden, OnwardElseware

This Book is very far from being any sort of compulsive page turner, for too much of its length it's a grind. -- Simeon Shoul, Infinty Plus

It is by no means the greatest fantasy novel, but it is, in a sense, the ultimate fantasy novel: it exhausts the genre. -- David Dalgleish, January Magazine

The main problem confronting Winter's Heart is that Jordan has left too many plot threads dangling, and he does not know where to begin. -- Book Worms