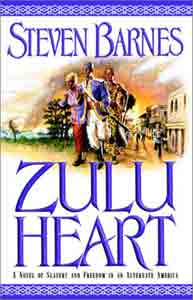 Set in the late 1800's in an alternate universe in which Africa colonized the America's, ZULU HEART continues the stories of two men from very different backgrounds. Kai is a politically important Ethiporan nobleman; Aidan, a white Irishman who was until recently Kai's slave. But just as the promise of freedom has separated these two men's fates, racial discourse is about to reunite them. A rebellion is building toward civil war. Loyalties are being drawn along the lines of homelands, namely Egypt and Ethiopia, and causing the New World to be torn into a North and a South-with Kai and Aidan caught in the crossfire.

There's lots of room for all sorts of enjoyment here, from re-charting the path of scientific discovery to expanding the scope of obscure traditional cultures. -- Nisi Shawl, The Seattle Times

I guarantee that you WILL NOT be disappointed. -- John Patrick Schmitz, The Door To Worlds Imagined

It succeeds as a good story on its own terms, and points the way toward even better things to come. -- Greg L. Johnson, SF Site

This is a good story, thoroughly recommended, and I am looking forward to what I am sure must be a further sequel. -- Paul Hanley, SFCrowsnest